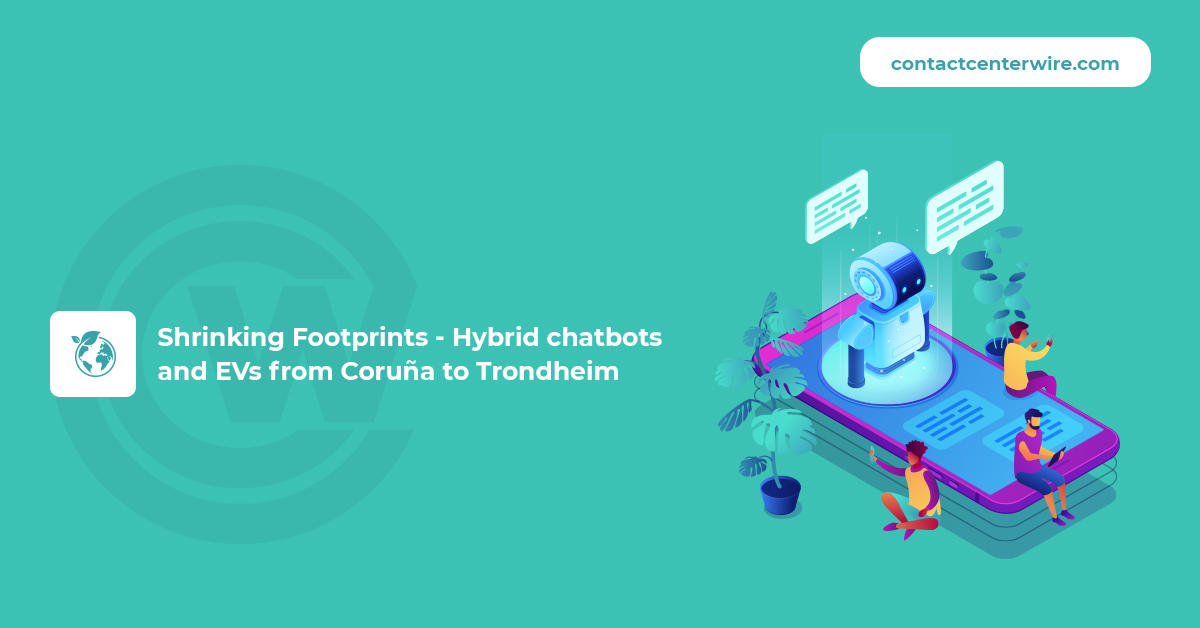 Hybrid chatbots and EVs from Coruña to Trondheim

One of the often quoted, and still true basics of our sector is that customer service is a must for anyone who has customers. Today, it's no news that clients in sectors that didn't even exist a few years ago are discovering BPO customer service. Moreover, it is not only climate change that is currently motivating the shift towards clean energy. In the following case study, we will discuss the relationship between sustainability, technological advances, and customer service, which have many interconnections.

We tend to view electric cars as a typical product of the 21st century, even though the first models were made as early as the late 1800s. Paradoxically, until the spread of the electric starter patented by Charles Franklin Kettering in 1915, many people preferred them over conventional cars because they were more comfortable and easier to drive. The development of internal combustion engines using fossil fuels then fundamentally determined car manufacturing for many decades, before the re-emergence of hybrid and then purely electric vehicles in the 2000s. Today, almost every major manufacturer has this type, not to mention Tesla, which has now become one of the strongest brands in the world, or emerging manufacturers such as Nio and Xpeng.

Again, the growing interest in electric cars has led to the worldwide development and subsequent expansion of the infrastructure that serves them. There are currently around 300,000 electric charging stations in Europe alone, and this trend does not appear to be reversing. Moreover, the outbreak of the Russian-Ukrainian war has made it a strategic goal for most European countries to reduce their dependence on fossil fuels as soon as possible.

At the same time, the operation of an increasing number of filling stations requires an ever-expanding infrastructure, including technical supervision, maintenance, and yes, customer service. This is where BPO contact centers, which can potentially be deployed cost-effectively anywhere, anytime come into play, as it is particularly important for dynamically evolving service providers with growing market share to be able to adapt quickly and geographically, linguistically, and business-effectively to new areas. companies working with professionals are entrusted with answering user questions, technical support services, or even administration related to corporate fleets from card applications to billing tasks. 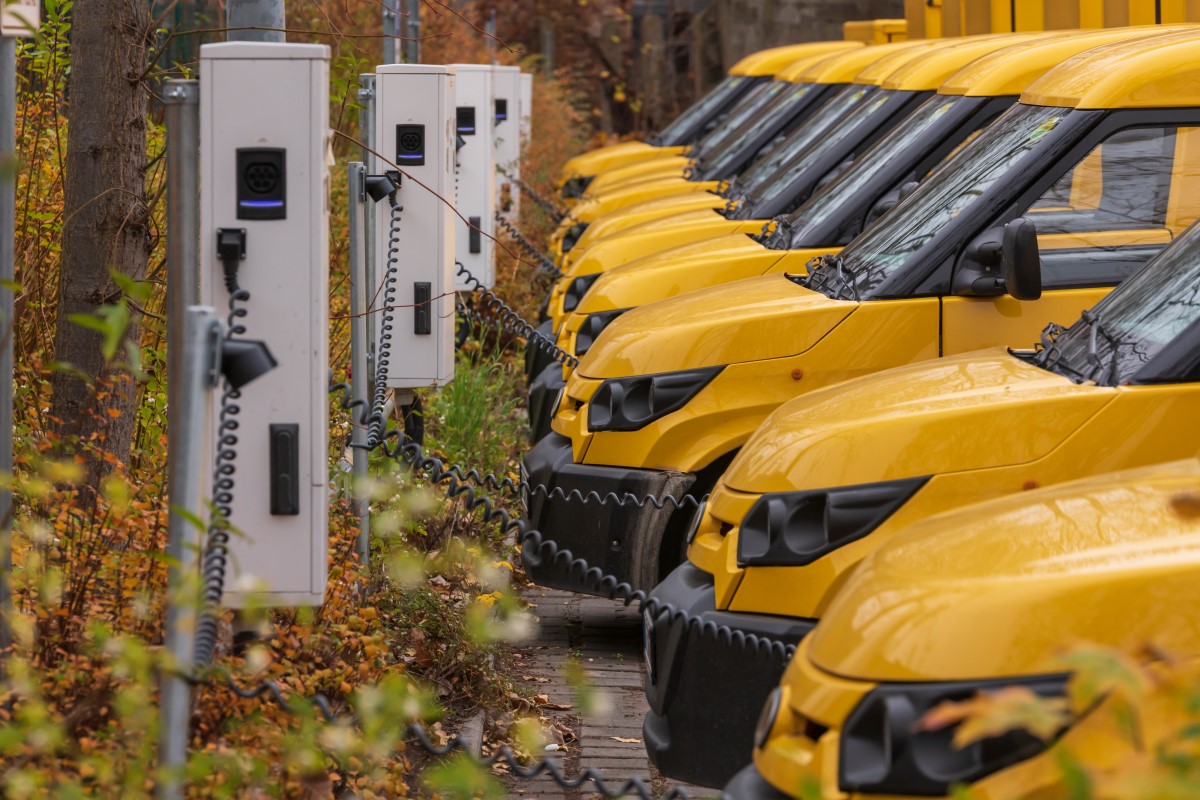 Let's see how it works in practice!

The implementation manager of the United Call Centers introduces us to the details.

“Our customer’s main need was customer support in four European languages, 24 hours a day, seven days a week. Outsourcing was also an unfamiliar field for them in terms of tools and experience, so we had to start designing the system from scratch.”

When implementing a new system, of course, a lot of questions arise. What kind of ticketing and back-office systems should we use, typically what types of inquiries can we expect from customers? Will phone, email, or chatbot be the right form of communication?

“Preliminary consultations revealed that non-voice services are most needed, primarily chat and email support. To handle these, we developed a chatbot, which was later supplemented with a live chat feature. Of course, we can also handle calls, but here written communication is the most common.”

But what are the responsibilities of a customer operating an electrical charging station network?

“Customer service from A to Z, i.e. handling any questions and complaints. A lot can happen in such a widely used, multi-country system. If there is a problem with the charging point, the charging cable is stuck, the customer paid more or less, the invoice was not received on time, and the customer service is already entering the picture. Feedback will always be sent to us in the form of a written message or a phone call.”

In addition to the selection of the appropriate ticketing software, it was a major professional task to build a chatbot that could speak four languages and be able to answer all the questions that might arise at the L1 level in such an international collaboration. Development in such cases presents the team with complex challenges.

"It was a process that required a lot of testing and correction, not only by the developers but also by the operators, team leaders, and testers. Millions of comments, and lots of content creation in all languages where the service is available. The icing on the cake was proofreading the chatbot flow in its native language since a common English phrase might mean something completely different in Dutch or French. I'm just adding the character limits imposed by the chatbot format as a point of interest. The implementation of the project involved about three months of active, day-to-day work for a team of about 10 people."

In the public mind, there is not necessarily a distinction between chatbot and live chat support. The difference between the two is that a chatbot is a system that does not require human resources, i.e. an automated customer service that does not require an operator to answer basic questions. Live chat support provides a more accurate answer to a problem, but at today's level of technology, it requires a human operator.

"In this campaign, due to the complexity of the tasks and questions, we often use the latter solution, which allows customers to ask questions more freely. But it's also often the case that the chatbot answers everything, so in that respect, we're talking about a hybrid solution." 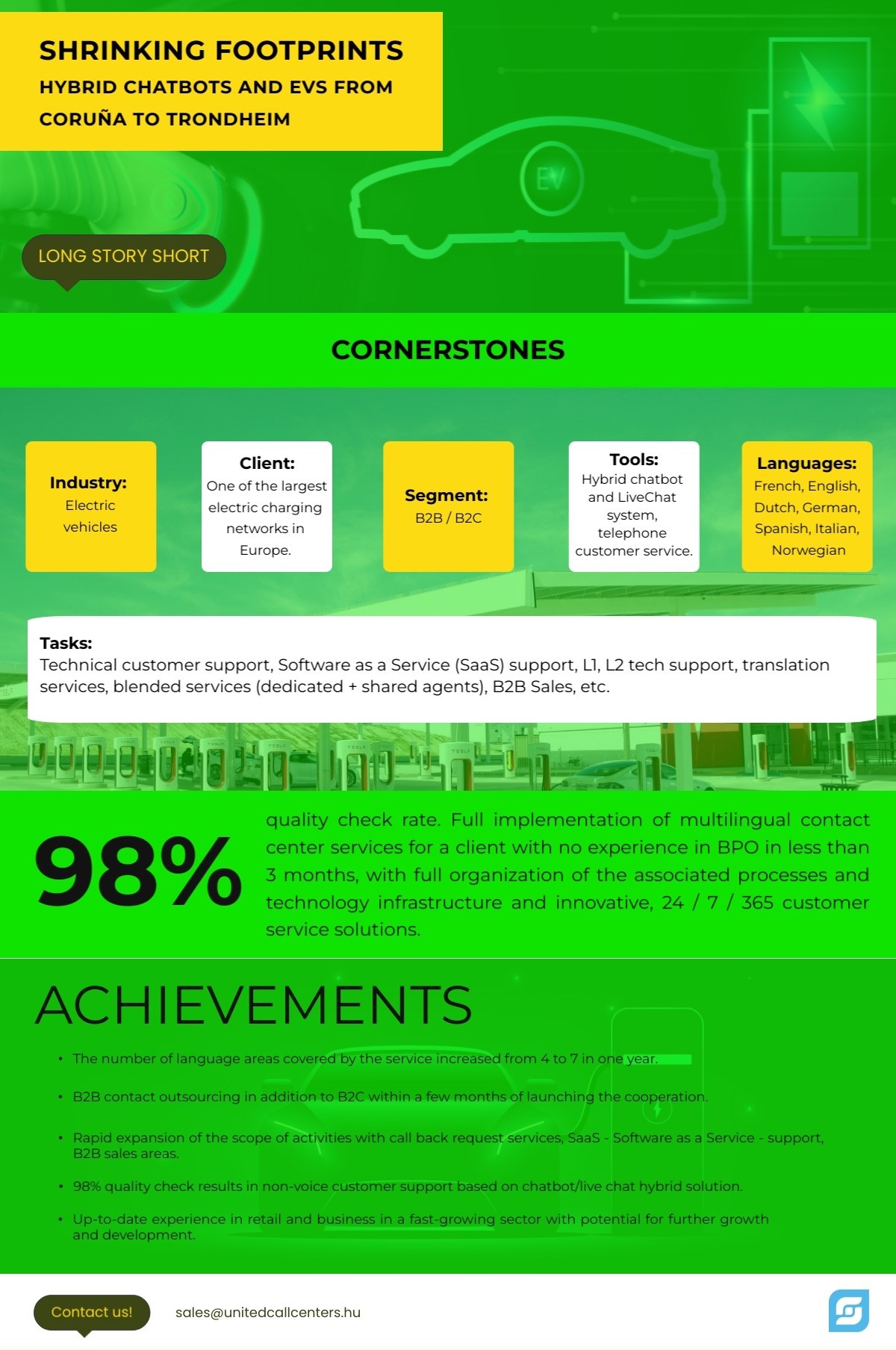 The soul of a good service is continuous monitoring and improvement. It's not enough to build the system, it's important that it's always responsive, whether it's to comments and feedback from customers or from the internal reporting team. For this particular collaboration, we are constantly improving the chatbot and the ticketing system, adding new features. We have developed tagging systems to filter certain requests. In addition, this is a non-stop service, so we had to find a team that could work at night to provide continuous support to our customers, as we also travel at night. In addition, as has already been said, the market is constantly evolving and customer service has to keep pace with this.

"In addition to serving residential customers, we have for some time now been dealing with B2B partners, companies that maintain a fleet of electric drive cars, both large and small. If a company has ten of these vehicles, that's B2B, but it could be thousands. We handle the delivery of application keys and cards, for example, and we have had thousands of cards ordered at the same time. A car can of course have dozens of cards, but that illustrates the numbers involved.

We also handle invoice management, but if a charging point freezes, we restart it through the system. Fortunately, our customer base is growing, and since launching at the beginning of last year we have expanded to three more countries and languages. It's fun to think that if anyone in this network wants to charge an electric car from Barcelona to Oslo, we can help them solve their problems, sometimes from thousands of kilometers away."

One of the most common stereotypes about outsourced customer services is that the staff of an external company are not experts and therefore cannot provide customers with the right quality of information or solve problems. Such highly technical cooperation is a perfect counter-example to this kind of perception.

Again, the keyword here is training. However, it is much easier to teach someone who already has call center experience and the necessary native language skills to do a particular task than to build a whole customer service team from scratch.

"An operator in this team not only has to have perfect language skills to answer an incoming message or phone call but also needs to know what he is talking about. They need to know the system, how it's set up, how the charging points work, what happens how, and why. For new team members working on the campaign, the training will last for a full week, eight hours a day. It's tough, but that's how long it takes to get to know the systems because we're also dealing with the back-end systems, where it's very different where you click." 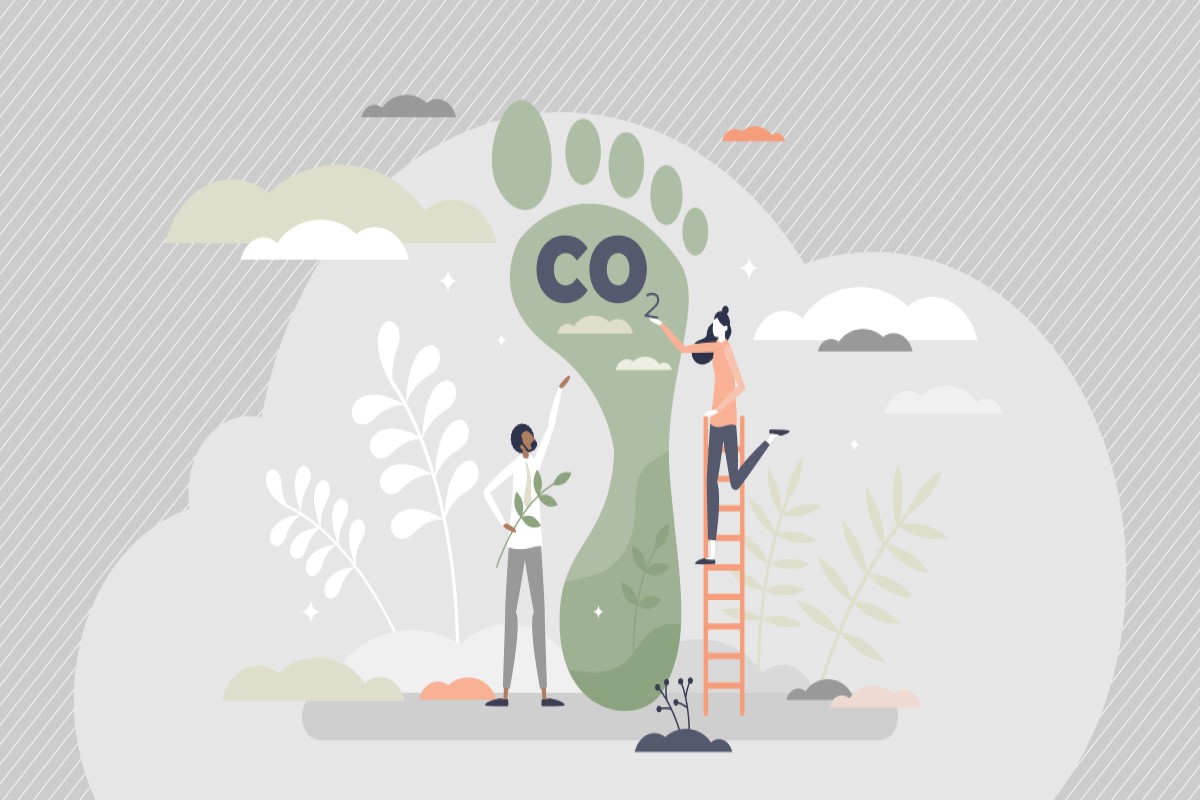 How green is it?

Maybe it's a big word, and of course, we always hear dissent, but replacing fossil fuels with cleaner energy sources in transport and transportation is certainly a hopeful step toward a society based on a cyclical, sustainable economic model, which could even be the key to the survival of the human race. Of course, this raises a number of questions. Will electric cars, which now require a much greater investment, ever recover their purchase price? How green is the energy we use to generate electricity? Several books could be written on this subject.

What is certain, however, is that decentralized customer service, typically employing staff working from home and thus with a much lower environmental impact, can in most cases assist customers from across the continent, saving the cost of maintaining a much larger physical maintenance team and infrastructure in the area of operation, this will certainly mean a smaller environmental footprint for all. Here's what our colleague had to say about this:

"Obviously, until the full infrastructure is built, more planning is needed for electric car transport. It's always worth finding out where charging points are going to be in the way before we set off, but we're talking hundreds of thousands of cars today for all the major operators, and that number is fortunately growing. Of course, if a charging point is not working on a motorway when there are only a few kilometers of charging available, it's a nuisance, but that's where a well-trained customer service team comes in and can help solve the problem."

If you'd like to read more of our case studies, click here to read the articles in this column! 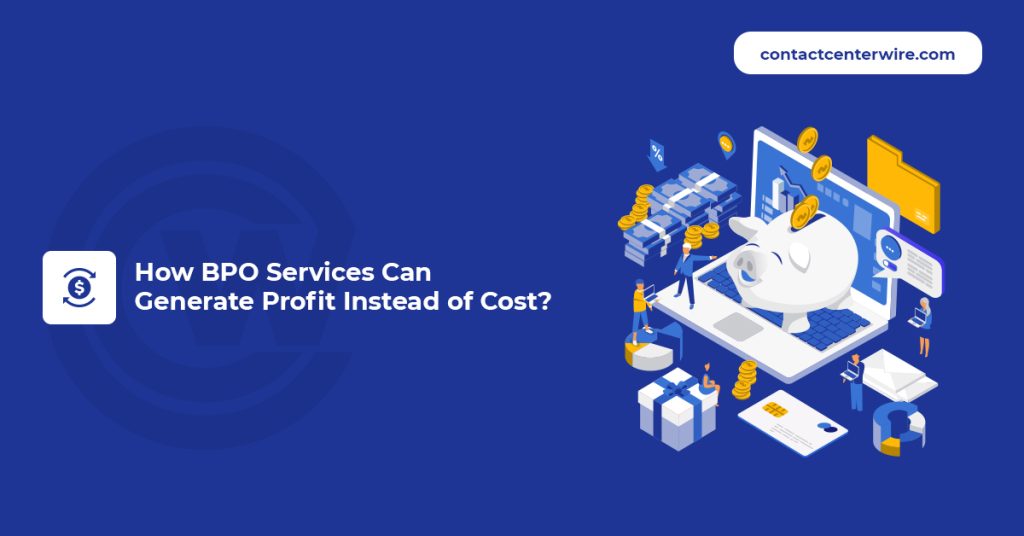 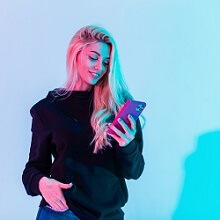